Abortion bans in the US: ‘Europe cannot sit back and relax’ 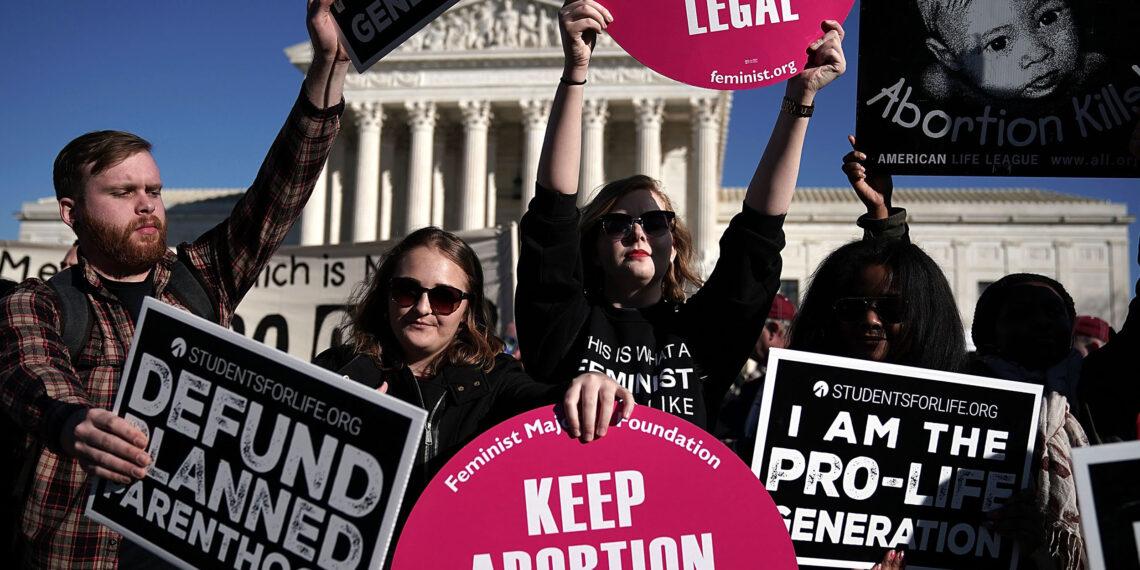 WASHINGTON, DC - JANUARY 19: Pro-life activists try to block the signs of pro-choice activists in front of the the U.S. Supreme Court during the 2018 March for Life January 19, 2018 in Washington, DC. Activists gathered in the nation's capital for the annual event to mark the anniversary of the Supreme Court Roe v. Wade ruling that legalized abortion in 1973. (Photo by Alex Wong/Getty Images)

As of 2022, the 24th of June will be marked by a dark spot in our history books, as a shock wave hit the female community. From one day to the next, American women were stripped of their constitutional abortion rights and human dignity.  From one day to the next, the US fell into complete chaos, with many States restricting abortion rights and others (unfortunately a minority) upholding them, and hitting the most vulnerable in society. Something that seemed to be acquired suddenly became an uncertainty.

Many Europeans might perceive these events as an American issue, but unfortunately, we record a different reality. Also in Europe, women’s rights are under extreme pressure. For example, several Member States prohibit abortion except in strictly defined circumstances. As a result, women are forced to have clandestine abortions or carry their pregnancy to term against their will. Other aspects are also under pressure, such as access to contraception, sex education, obstetric care, and access to medical assistance. On 22 October 2020, the Polish Constitutional Tribunal prohibited abortions in cases of serious fetal deformity as it was deemed ‘incompatible’ with the Polish Constitution. The measure bans all abortions in Poland, except in cases of rape and incest, or when the mother’s life is in danger. The decision led to mass demonstrations, with thousands of Polish citizens protesting for abortion rights. Despite the protests, the situation for Polish women remains unchanged.

Moreover, these recent developments are just the tip of the iceberg: similar bills have been discussed in the other Member States, such as Croatia and Lithuania. The erosion of fundamental rights is part of a broader ultra-conservative and far-right agenda, first targeting women, then LGBTIQ+ persons, migrants, and other minorities. These movements are strongly linked to the erosion of the rule of law and funding by religious institutions and fundamentalists. Just look at the decision of an unconstitutional tribunal in Poland that restricted access to abortion. Once part of the EU club, fundamental values and rights are under attack. The European Parliament called several times on the Council and Commission to take action, but recent developments in the Ukraine crisis put this on hold, as Europe ‘would depend’ on Poland to solve the Ukrainian refugee crisis. Quod non.

Let’s be clear. Stricter rules do not automatically lead to fewer abortions, on the contrary. Women’s lives are put at risk. Research has shown that this is not true at all. On the contrary, the number of abortions will increase. In countries where sex education is provided in a balanced manner, where contraception is given in a balanced way, where contraceptives are readily available, and where there is easy access to abortion, numbers are much lower than in countries where they apply strict legislation. If there are no safe or legal routes, people will look for cross-border, dangerous, and illegal ways, with all the consequences that this entails. Similarly, care workers no longer dare to intervene when things go wrong with pregnancy because they fear breaking the rules. In these countries, people often have a negative attitude towards women’s rights and contraceptives and we all fear that this backlash will not stop.

Therefore, we liberals are calling for the inclusion of sexual and reproductive health and rights, including abortion, in the EU Charter of Fundamental rights and national constitutions. Access to legal and safe abortions must be guaranteed in health care facilities and abortion decriminalized. We must give legal certainty to all our European female residents and protect their human dignity. We should give them back control over their body and ensure no single person can strip them. This is not only about women but about our European society as a whole. Women are its foundation. Additionally, there is an urgent need to repeal restricting access to contraceptives and Europe should provide adequate funding for national and local organizations working on these issues. Prevention is vital. Finally, it is essential that women and girls be involved in the formulation of policies that affect their lives.

Our mothers and grandmothers fiercely fought to acquire sexual and reproductive rights. Now it is up to us to stand up and fight for her, for us, for them. Women’s rights are human rights, Europe cannot sit back and relax.